“So you’re a space camel vampire that derives superpowers from water? That’s not nearly as terrifying as your appearance suggests.” 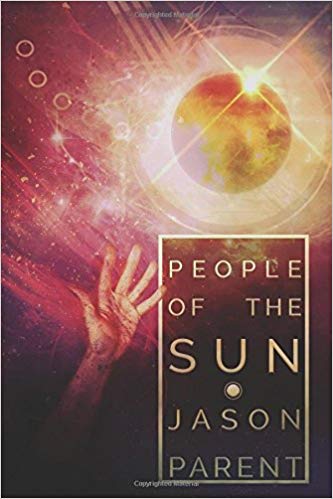 What Is It About?

Jason Parent’s People of the Sun is a science fiction book that takes place in the near future. The book opens with State Trooper Matthew Simpson and his geologist friend Connor Gaudreau hiking through the misty edge of a lake toward a meteorite that landed there. As they approach the object, they notice that the lake has completely evaporated and that the heat is so great that the skin from the corpses of the fish has been cooked off.

The meteorite is not quite what it appears, though. It’s actually a spaceship from the inside of the sun, carrying four aliens, desperate to find resources for their collapsing society. When their ship takes off from the sun, which they call Symoria, there’s some sort of explosion, which causes them to crash into Earth.

Connor and Matt encounter the aliens in the woods near the crash site, where they meet Lenyx, the team’s leader, along with Tryst, Milliken, and Kazi. While the first three understand the importance of getting along with the inhabitants of this new world, Kazi has more sinister goals, his main motivation being to rape Tryst, who is in love with Lenyx.

Connor quickly learns that the aliens are very dangerous. When they come into contact with water, they gain powers, including telekineses, teleportation, and telepathy. They can also kill humans by touching them with their bare skin, usually resulting in the human turning into a pile of ashes.

Despite good intentions, things start to go wrong. At a press conference, Lenyx accidentally turns the American president into a pile of ashes. The government and military go after them, as Connor tries to help them as best he can.

There are definitely things I enjoyed about this book, but there are many more things I found problematic.

One of the things I appreciated was that most of the book is told from the aliens’ point of view. So many science fiction novels are told from the perspective of humans interacting with aliens, so it was refreshing to see something a little different. Although they were multidimensional, I wish the characters had seemed more alien; when the aliens encountered earth and gained their telepathic abilities, they begin to act and think so human that I kept having to remind myself of their extraterrestrial origins.

It was nice that this was a fast-paced book. So many science fiction books tend to be heavy reads, but this one was definitely quick. I finished it in about six hours of reading. That said, I wish there had been more details on the structure of Symoria’s government and culture, as I’m a huge fan of world-building.

Some of the sentences are a little awkward:

“Then it melted and slid down the formation like a pickle smeared in ketchup thrown against a window.”

And then this description of the aliens that I could not, for the life of me, picture in my head:

“Tryst only smiled bigger, so big it covered half her face with four rows of double-pointed teeth, massive fangs retracted behind black gums. Her slim, sinewy lips, so colorless they were nearly transparent, curled beneath her bulbous pink globe eyes. “There’s nowhere else to go but out,” she said, chuckling. As she laughed, her small, hairless snout wiggled in a way Kazi found enticing.”

The reason I was so confused by this description is that, in other parts of the book, they make the aliens seem somewhat human, albeit much larger.

The primary problem I had with this book is that it asks the reader to suspend too much disbelief. Readers of science fiction and fantasy novels are used to doing that, as most books of those genres take a lot of liberty with reality. People of the Sun, however, requires us to believe that there are aliens living in the center of the sun who, once they arrive on earth, have no problem breathing our air. They can subsist on nothing but water. And then, there’s the ending.

The ending of this book frustrated me and is the primary reason I ended up giving this book two stars on Goodreads and Amazon rather than the three I had planned on. At the end of the book, Tryst gives birth to twins, but in the process suffers injuries and is dying. She telepathically calls Connor to her and asks him to take care of her twins after she is gone. Okay, that’s reasonable… except for the part of the book where humans and Symorians cannot touch one another without the human dying. At the end of the book, however, that’s explained by Tryst telling Connor that her offspring are different because something on Earth affected them and their skin is no longer dangerous for Connor to touch.

It felt like a cop-out to me. There is no way Tryst would have known that, having no one to test her theory on. The parents of the twins were both full-blooded Symorians, so it just didn’t make sense to me that their genetics would change that easily.

Skip. While I really did love having a book narrated from the point of view of aliens, there are much better science fiction novels out there.

3 thoughts on “Book Review: People of the Sun by Jason Parent”