On this road there are no godspoke men. They are gone and I am left and they have taken with them the world. Query: How does the never to be differ from what never was? 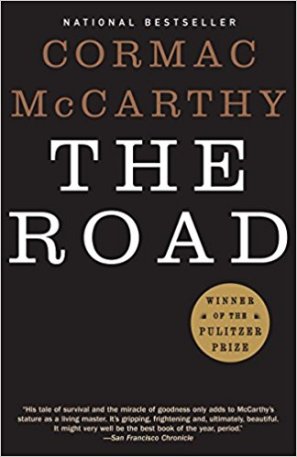 This is Cormac McCarthy’s most recent book to be published. It is a post-apocalyptic tale told in a very minimalist style. By minimalistic I mean that there’s very little we actually know: McCarthy never tells us what happened to cause the mass extinction event, we don’t know the names of our two characters, we have no idea where exactly the story takes place, and we don’t know how long it’s been since the cataclysmic event happened.

What we do know is that a man and his son are trying to survive against the many, many odds that are stacked against them as they travel south in an effort to escape the brutal winters. They’re starving, sleeping on the ground, scavenging what bits and pieces they find along the way. Their world is described as gray and covered in ash. There are earthquakes and the sun is all but absent.

The Road won the 2007 Pulitzer Prize for Fiction, along with several other awards.

The Road is my favorite book. I’ve read it every November since the first time I picked it up almost a decade ago. Despite reading it so many times, the last few pages still make me weep. This book is devasting.

The thing that a reader first picks up on is the writing style. McCarthy is not a fan of punctuation and proper grammar. You will not find any quotation marks in this book. He also leaves everything as vague as he possibly can. As I mentioned in the synopsis above, we don’t know much of anything. Throughout the book, the father is referred to as the man, and his son is the boy. They walk through towns but we are never told what town they’re in. I’ve heard a lot of people say that McCarthy’s style is off-putting, and while I do understand that, I actually really enjoy that aspect of this novel. The anonymity of the story makes me feel like it could happen to anyone. I also just love McCarthy’s overall writing style:

No lists of things to be done. The day providential to itself. The hour. There is no later. This is later. All things of grace and beauty such that one holds them to one’s heart have a common provenance in pain. Their birth in grief and ashes. So, he whispered to the sleeping boy. I have you.

The vagueness of the setting also serves to bring the focus of the story to the relationship between father and son. They have nothing but each other. The father will do whatever it takes to keep his son alive, while the son wants to help others and is terrified of the world around him.

Then they set out along the blacktop in the gunmetal light, shuffling through the ash, each the other’s world entire.

The characters frequently mention god and “carrying the fire,” but even the religion is vague in the story. You can read what you want to in it.

The individual scenes in The Road are mostly devasting, terrifying, sickening, and worse. I don’t want to include spoilers, but there are a few scenes that will leave you shaken, such as one that takes place in a pantry beneath a kitchen. However, much less frequent, there are also a few happy scenes that will make your heart swell, such as when they share a scavenged Coca-Cola, which the boy has never tasted before. It’s a sweet scene that breaks up the terror of their lives.

Despite how many times I’ve read this book, I still weep while reading the final few pages. The ending is depressing, and it also makes me cry for a more personal reason.

The man, who spends the latter part of the book coughing violently, reminds me of the couple of years before my mother died. She would also have incredibly long and disturbing coughing fits. When it happens in the book, it brings those memories back to me, and that is definitely one of the reasons this book makes me cry every single time I read it.

I recommend this book to literally everyone. I will continue to read it every November as I’ve been doing. It’s the perfect book to read once the leaves have mostly fallen off the trees and the landscape is starting to get a wintry, barren look.

Have you read The Road? What did you think?

10 thoughts on “The Road by Cormac McCarthy”

My company just told us that we’ll be working from home until at least August 1st, possibly longer. I am absolutely okay with spending that time working underneath my sleepy kitty supervisor.
My succulent exploded with babies. Apparently I’m not as terrible with plants as I though. #plantstagram
#kittycatlayla has decided that she likes to bite my arm while I’m on the phone with clients. She’s too cute to be mad at though. #catsofinstagram