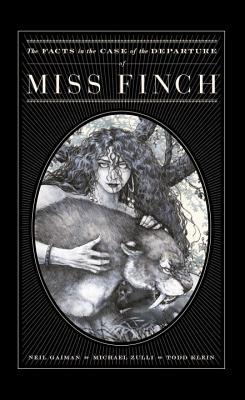 I had never heard of this Neil Gaiman graphic novel until I came across it while perusing the comic book shelves at my local library. As I’ve mentioned so many times on this blog, I love Neil Gaiman’s writing, so I added it to my pile without looking at the synopsis or anything else.

The Facts in the Case of the Departure of Miss Finch is about a group of four people, including Miss Finch, who go to an urban underground circus together. A lot of bizarre things happen, and the acts of the circus are all over the place – from flying ghostly apparitions to a man hanging from the ceiling by his nipples to a guy in a fish costume motorcycling around the audience. Miss Finch disappears, and we’re left wondering what happened to her. 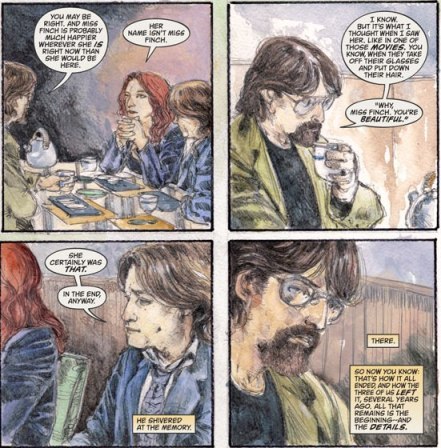 While this was an interesting graphic novel, it wasn’t one of my favorite Neil Gaiman works. It was difficult for me to get past how much I disliked the art. It wasn’t that the art was bad, it was just of a style that I personally don’t enjoy in comics or graphic novels. It was a little rough around the edges and had a watercolor quality to it. Again, I think the art is good and does seem to work for the story, I just wasn’t a fan of it.

My favorite books or stories are the type that leaves you guessing and thinking about it even after you close the book. This is not one of those. While the story was entertaining, after I finished it I found that I stopped thinking about it after setting it down. I didn’t realize this at the time I read it, but apparently, this is a graphic novel adaptation of one of Gaiman’s short stories. I feel that I may have appreciated it more in story format. The graphic novel format felt too short and rushed.

This was by no means a terrible graphic novel or story, and it was mildly entertaining, but it just wasn’t for me. I definitely favor Neil Gaiman’s novels more than his graphic novels. I’ve read three of them, and none of them lived up to my expectations.

Have you read The Facts in the Case of the Departure of Miss Finch? What did you think?