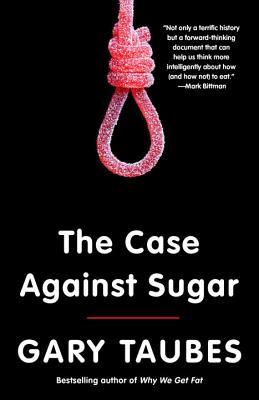 I’ve mentioned several times on my blog now that I gave up sugar for the month of January in an attempt to be healthier and to try to get my body to stop craving sweets. I find that whenever I’m doing something challenging, reading about why I made that decision helps to keep me focused. In that vein, I purchased The Case Against Sugar by Gary Taubes, the author known for the book Why We Get Fat.

When I bought the book I assumed it was going to be about the nutrition of why sugar is so bad for us. If I’m being honest, I didn’t even read the synopsis but instead purchased it based on the title alone. What I wasn’t expecting was a complete history of how sugar became so prevalent in the western world and the effect it has on diseases such as diabetes, heart disease, Alzheimer’s, and cancer, but I’m happy that it’s the book I got.

In the introduction to the book, Taubes lays out his argument:

“…that sugars like sucrose and high-fructose corn syrup are fundamental causes of diabetes and obesity, using the same simple concept of causality that we employ when we say smoking cigarettes causes lung cancer. It’s not because we eat too much of these sugars – although that is implied merely by the terms ‘overconsumption’ and ‘overeating’ – but because they have unique physiological, metabolic, and endocrinological (i.e., hormonal) effects in the human body that directly triggers these disorders.”

From there he examines sugar in every way that can be done. I especially enjoyed his discussions on the history of sugar reaching the western world and how it’s been perceived as a healthy food for portions of that history, even being used medicinally on occasion:

“‘It was good for almost every part of the body, for the very young, for the very old, for the sick and for the healthy,’ wrote the British historian James Walvin. ‘It cured and prevented illnesses; it refreshed the weary, invigorated the weak.'”

The most striking (and, truthfully, infuriating) aspect of sugar that Taubes examines is that sugar was found to be unhealthy early on, but the sugar industry used its financial influence to pay scientists to argue that it wasn’t. Research was purposefully overlooked or not taken seriously, and the industry did everything it could to blame dietary fat for the issues that should have been attributed to sugar.

I was startled to realize while reading this book that so much of how we think about nutrition, calories, and sugar was instilled in us decades ago by the course that this research took. So many people are still drawn to “low-fat” products despite the fact that the majority of these products are filled with sugar; there are groups that still believe that “a calorie is a calorie,” regardless of where those calories come from. There were even times in the recent past where organizations such as the American Heart Association were recommending patients eat sugary treats rather than foods high in fat to stay healthy. It makes me feel that the role of sugar in our diet is going to be slow to diminish.

Taubes uses a lot of evidence to make his argument that sugar could be the cause of many of our “Western diseases” that have become more prevalent since the introduction of sugar into our diets. He examines hundreds of years of medical history, as well as very convincing population studies. Those population studies were the most plausible arguments to me. As populations added sugar to their diets, their instances of diabetes and similar metabolic diseases suddenly starting appearing en masse in populations that rarely saw those diseases prior to sugar.

I’m definitely not saying that sugar should be cut out of our diet completely, and I also didn’t get the impression that that was Taubes’ goal either. Instead, the quantity of sugar we eating is extraordinary and perhaps we shouldn’t indulge ourselves quite as much as we’re able to. I still plan on enjoying my weekend bowl of ice cream after this month ends, but this book has made me more cognizant of the role that sugar could have on my overall health, particularly as I age.

This book was a wonderful, comprehensive look at sugar and it’s history. I’d recommend it to anyone interested in the history of foods, or that just want a deeper look at the effect that our highly sugar-filled diets might have on our long-term health.

2 thoughts on “The Case Against Sugar by Gary Taubes”