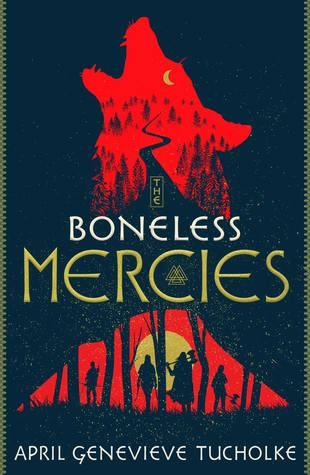 I was intrigued by this book after hearing it described numerous times as a gender-bent retelling of Beowulf. I thought that was a really awesome idea, so I decided to read both Beowulf and The Boneless Mercies back to back. I love anything inspired by Scandinavian history and Vikings, so I had a good feeling about this book.

What I discovered in this novel, however, was not so much a retelling of Beowulf, but instead a story about a strong group of women working together to change their lives and do what’s right.

The story takes place in a setting that is very obviously inspired by Norse history, and Viking mythology more specifically. The author, April Genevieve Tucholke, decided to differentiate between real history and the setting of this novel by changing some names a tiny bit: instead of Odin, they worship Oben; instead of traveling to Valhalla when they die, they end up in Holhalla. Those changes only distracted me from the story, and they’re so close to the real thing that I wish Tucholke had just decided to leave the names as we know them.

The group of girls that we follow are called Mercies, and they perform mercy killings for people who are near death and suffering. Very rarely, they will do a vengeance killing, but they travel from village to village and are sought out for their services. I was hooked from the very beginning of this novel. Between the atmospheric first chapter, where they are performing one of those mercy killings, to the idea of their role in society, I found all of it very fascinating and flew through this book in order to learn more.

Tucholke’s writing is well-paced, and I enjoyed her use of foreshadowing to move the story along. While I’ll admit that the foreshadowing was blatantly obvious, and I generally want something less so, it worked well in this particular novel. I also appreciated that all of the main characters had distinct personalities and wants. None of them wanted the same things in their future, but their connections and loyalty to one another were what kept them together.

Our main character is Frey, who isn’t happy with her current life. She dreams of a life of glory and wants to become a warrior:

A person was never truly dead as long as someone, somewhere, remembered them. Memories made you immortal. This was why men went to war. Why they had climbed in their longboats and raided Elshland, before the gold dried up. They risked their short, mortal lives for the everlasting glow of immortality. A chance to be a hero in a bard’s song.

As the group of Mercies travels, they hear of a deadly beast who is terrorizing villages and the jarl has put a price on its head. Despite hearing that many have tried to kill the beast only to die themselves, Frey and the others decide to take on the task themselves and make a pact to head to that distant jarldom.

The journey is a dangerous one, however, as it takes them through the Red Willow Marsh, which is ruled by a witch called “The Cut Queen,” who is known for her violence. Eventually, the Mercies make it to the village that the beast is terrorizing, and announce to the Jarl that they have come to save them all.

If this was an intentional retelling of Beowulf, it was a very, very loose one. The only real similarities that I could see were that the story was inspired by Norse mythologies and that their goal is to kill a beast terrorizing a village. That’s it. The rest of the story is nothing like Beowulf, and I feel that the expectation actually takes away from the enjoyment of this story. I kept expecting certain things to happen, and doing so took away some of my organic enjoyment of the story.

There are three things I adored about this book that I want to point out:  First, this is really a book about friendships. I loved all of the relationships in this novel, and they were endearing and realistic. Second, it was fun reading a combination of Norse mythology and witchcraft, and I wish that was a setting that was used more, especially in adult fiction (if you know of any, let me know in the comments!). Finally, the author does an amazing job of humanizing the villains in the story, and I love the theme of wrong and right not being entirely separate; in fact, that was probably my favorite aspect of the story.

Overall, I really enjoyed this novel, despite its imperfections. I wish the author had spent more time describing the settings and society to us, and I would have loved more backstory on each character. However, in the end, it was a book I’m glad to have read.