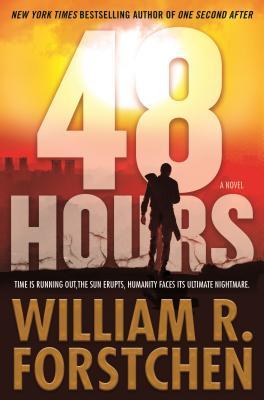 My favorite genre in literature, television, film, and video games are all the same:  Post-apocalyptic. I seek out any novel I can find that involves the world ending.

When I heard of William R. Forstchen’s new novel, 48 Hours, I reached out to Tor.com about a review copy, which I’m very thankful to have been sent. I had read his previous novel a few years ago, One Second After, which took place around Asheville, NC where I was living at the time. That book is also post-apocalyptic, involving an EMP attack on America.

48 Hours is about a deadly solar explosion that is going to strike Earth in two days and how humanity prepares for the extinction-level event. The story follows two main characters, Darren and his wife Darla, who live in Missouri; and Richard Carrington, a NASA scientist and descendant of a scientist of the same name who first discovered solar flares in the 1800s.

As Richard Carrington and the American government realize how bad this solar storm is going to be, the government takes steps to save themselves and their families. Meanwhile, Darren, who works at a large underground storage facility, learns of the impending disaster through his ties with the military that he once served in. When Darren learns that the state of Missouri is planning on using the underground facility to save members of the state government, he takes matters into his own hands and, with the help of other members of the community, takes control of the facility. Their goal is to let only children in along with a few hand-picked adults, such as a doctor and teachers, to maintain control.

The novel was enjoyable and kept me engaged until the end. I enjoyed the storyline that follows Richard Carrington and the growing horror that he and the President experience as they realize the severity of the coming storm. I appreciate that Forstchen appears to put a great deal of research into the science of his novels. The coronal mass ejection was explained thoroughly, as was the solar storm (“Sauron’s Eye”) that would come immediately afterward. I love real science in fiction (I am a Trekkie after all), and I would have been okay with the entire story following Carrington.

The part of the story that follows Darren and Darla left a bit more to be desired. While I understand that they were trying to do something noble and good by taking over control of the underground facility and only letting children in, it doesn’t exactly seem practical, and it definitely wasn’t well planned out. There are very few bathrooms in the facility, and literally thousands of children. I also find it unbelievable that a group of essentially local militia would be able to wrest control of the facility from the government, which has air support and troops to back it up.

The moral dilemma raised in this novel was interesting, but I wish it had been handled differently. It’s a normal trope in post-apocalyptic fiction to focus on how to decide who lives and who dies, but it’s a topic that fascinates me.

If you’re interested in reading one of William R. Forstchen’s apocalyptic novels, I recommend starting with One Second After, which feels much more thought out and is more interesting. This story felt a little flat to me.