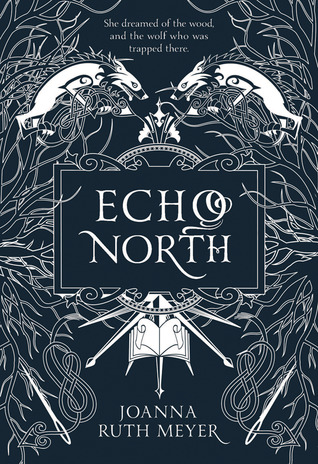 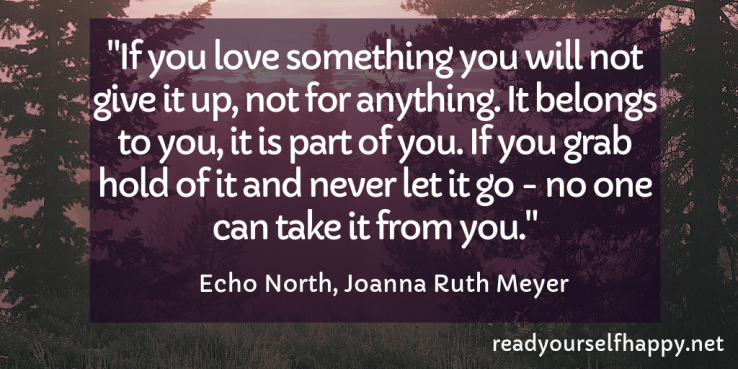 The only two things I knew about this book when I added it to my Goodreads TBR list were that it has an absolutely amazing cover and that it’s a fairy tale retelling. I can’t stress enough how much I love this cover. It’s one of my favorites from the new releases of this year.

Echo North is a fairy tale retelling based on the Norwegian East of the Sun, West of the Moon, with other influences including Scotland’s Tam Lin and 19th Century Siberian Russia. It’s very easy to see all of these elements in Joanna Ruth Meyer’s novel, and I love that, at the end of the book, she included an author’s note that discusses her influences.

The novel follows Echo, a young girl whose face was badly scarred by a white wolf as a child. As a result of her scars, the villagers treat her badly and believe she has the devil in her. One day her father goes to the city to sell some of his manuscripts to fix the family’s financial woes, and he doesn’t come back. Echo stumbles upon his barely-alive form in the snow in the woods, where she also encounters the same white wolf that scarred her all those years ago.

The wolf makes a deal with her:  He’ll save her father if she agrees to go with the wolf and live with him for one year. Terrified of losing her father, Echo agrees and is whisked away to a magical, living house.

The wolf teaches her how to care for the living house and tells her that he is dying. Over time, the Wolf and Echo become friends. Echo also discovers a library full of book mirrors – mirrors you can step in to in order to experience an entire story. She meets two new friends in these stories; Hal, a handsome young man that immediately intrigues Echo, and Mokosh, a princess with her own library full of book mirrors.

Working alongside the wolf, Echo tries desperately to save the house which is become unsafe and unbound, while also trying to save Hal, who is trapped in the book mirrors.

I wanted to like this book so badly, and I did get some enjoyment out of reading it, but the entire plot is based around an incredibly problematic romantic relationship, and I couldn’t overlook the implications of that relationship.

Essentially, the wolf tricks Echo into staying with him. As soon as Echo made her promise to the wolf, a villager from her village drives his cart along the path where her father is, and it’s the villager who takes her father to safety. The wolf even admits to Echo further into the story that this would have happened anyway.

The wolf is dishonest with her as soon as she’s in his house, even attacking her when she steps into the wrong room. She forgives him for all of this, but there’s a much more serious betrayal. Again, this part contains spoilers, so if you haven’t read the book you might want to skip this section.

When Echo discovers that the Wolf is Hal, and that he’s tricked her into taking his place as a possession of the evil Queen of the Wood, she still forgives him. Call it Stockholm syndrome or Echo’s own passivity, but I can’t support a story with such a problematic “love” in it. Echo not only endures a great deal of pain and suffering to free her captor and betrayer, but she does it twice! If I were in her shoes (and I believe this would be true for any self-respecting person), once I learned the truth of Hal’s deception and lies, I would leave him to his fate. After all, he didn’t respect Echo and took her away from her family and her life. Why on earth would he deserve any respect?

This novel also contains every fairy tale trope you can think of:  An evil stepmother, an evil queen, talking animals, magic mirrors, the main character’s dead mother, and the list goes on and on.

I did really like the idea of the book mirrors, and that’s a fantasy element I can get behind. Just imagining something so wonderful and magical makes me happy. Unfortunately, one interesting element couldn’t save the entire book for me.

Due to the problematic love interest, I can’t give this book any more than two stars. While there were some elements that I didn’t hate in the first half of the book, once the truth of the Wolf came to light, all respect I had for this book disappeared.

Have you read Echo North? What were your thoughts?

10 thoughts on “Echo North by Joanna Ruth Meyer – A Review”

Leave a Reply to Mir (TBR and Beyond) Cancel reply