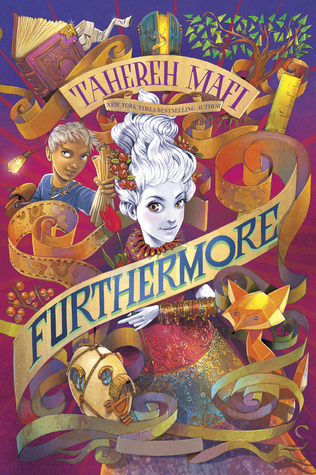 The first Tahereh Mafi book I read was A Very Large Expanse of Sea, which I rated 3.5 stars and really enjoyed. One of the things that struck me about that novel was how gorgeous Tahereh Mafi’s writing was, and that sentiment has only been strengthened by reading Furthermore.

Furthermore tells the story of a land full of color, and a young girl named Alice who is completely devoid of color. Alice’s father has been missing for several years, and no one has any idea where he disappeared to. Alice has younger, triplet brothers who she essentially has nothing to do with and a mentally absent mother who seems not to care about Alice. More than anything, Alice just wishes to have her father back and to be as colorful as the rest of the citizens of the land called Ferenwood.

When children in Ferenwood turn twelve, they participate in what’s called their Surrender. During this event, each child shows the town elders what kind of magical gift they have received, and then each of them receives a task to complete.

Alice’s Surrender doesn’t go quite as planned, so she agrees to help a boy named Oliver, whose task it was the previous year to find Alice’s father. Things are made difficult by the fact that Alice and Oliver definitely do not get along. As they venture into the land of Furthermore, things became stranger than Alice ever could have imagined.

Furthermore is beautifully written and very colorful, figuratively and literally. The story is full of whimsy and is exactly the sort of book I would have been obsessed with when I was of middle-grade age.

Alice is an immensely likable, sassy character, even if she is somewhat prone to violence, which I can’t condone. She’s an outcast and feels lonely, but at the same time her confidence in herself is a great message for children reading this book:

“Alice would choose to love herself, different and extraordinary, every day of the week.”

At the same time though, Alice is vulnerable and learns quite a few lessons about friendship, honesty, trust, and embracing the unexpected throughout her journey.

“She’d decided long ago that life was a long journey. She would be strong and she would be weak, and both would be okay.”

Oliver’s character I liked less, just because he wasn’t as well developed as Alice, and it was annoying how much he kept her in the dark, even when it was detrimental to both of them to do so. I did enjoy the friendship that gradually bloomed between them, but his character could have been better.

I’ve heard from some readers that they didn’t enjoy the speed at which the setting changes as Alice and Oliver travel through Furthermore. Essentially, each town or settlement in Furthermore has its own unique set of rules and dangers. Oliver knows some of what to expect because he’s been to Furthermore before, but he keeps Alice in the dark for the most part. The pair of them are constantly thrust into new, strange situations and communities, but I feel like it added to the whimsy of the overall story. The reader becomes just as flustered as the characters, which I enjoyed.

All of the characters of Ferenwood have magic, but the magic system is never actually explained beyond the fact that children are born with a unique magical gift. I read a lot of fantasy, so I tend to expect well-thought-out magical systems. Since this is a middle-grade book, I feel as though I should cut it some slack, but the lack of a well-explained magic system is the primary reason this book didn’t receive five stars.

I love this book for a variety of reasons, but above all else, for the novel’s main message:

“Why must you look like the rest of us? Why do you have to be the one to change? Change the way we see. Don’t change the way you are.”

Oh, and of course the origami fox. As you can tell from my blog design, I sort of like foxes.

Have you read Furthermore? What did you think? Let me know in the comments!

7 thoughts on “Furthermore by Tahereh Mafi”