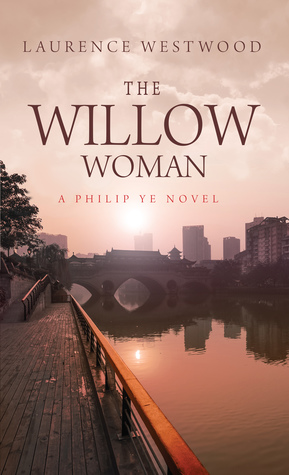 I received a free paperback of this novel in exchange for an honest review.

I tend to mostly read fantasy or science fiction, so I’ve been trying to make a conscious effort to branch out into other genres. When Laurence Westwood reached out to me and asked if I was interested in reviewing The Willow Woman, a mystery novel set in modern-day China and with a slight paranormal aspect, I jumped on the opportunity.

There are several characters that we follow as they try to unravel the mystery surrounding a shooting, a missing son, and a cult that worships the Willow Woman. Philip Ye is a homicide detective who is led to the sight of the shooting by an apparition that appears to him the night before. We also meet Ma Meili, the constable that does the shooting that Philip Ye witnesses; Xu Ya, a new public prosecutor, and her investigator, Fatty Deng.

I was hooked by this novel pretty early on. It’s a fairly long novel, but one that I flew through easily and was constantly kept guessing about what would happen next. I was thrilled that I wasn’t able to immediately guess the ending or twist of the novel like I have with many other mystery books I’ve read in the past.

Laurence Westwood’s writing is absolutely spectacular. Everything flowed nicely and it was paced perfectly, the language and word-choices kept me engaged, and the perspectives transitioned smoothly from one character to another. I’d recommend this book based on Westwood’s writing style alone.

There were some moments in the book where women are subjugated or that just felt sexist, but while reading it I discussed those moments with someone that has quite a bit more knowledge of Chinese culture than I do, and they told me that it’s not a far-off representation of some of the plights of women in modern-day China. Some examples include the “Beautification” program of the police to hire attractive women to make people like the police better; Ma Meili constantly being called an ogre or ugly or simply treated poorly because she’s not “attractive;” and the portrayal of women just generally being focused on men, relationships, and marriage more than anything else. After speaking to my friend, I’m assuming this was done to make the story more authentic to how women are treated in China.

The only reason I’m not giving this book five stars is that I was frustrated by Xu Ya’s obsession with Philip Ye. It didn’t make sense to me and their connection was too loose to intrigue me. They attended the same school many years ago and never spoke, and yet Xu Ya has seemingly been obsessed with him for years and years. While I understand that Philip Ye is supposed to be an incredibly attractive, rich, much sought-after bachelor, it still felt a little forced.

Overall, there’s so much to keep you interested in this novel, from the main mystery to the political intrigue that I definitely recommend to anyone wanting a new mystery novel to read, and a new author to explore. I’ll certainly be looking forward to any future novels written by Laurence Westwood.

3 thoughts on “The Willow Woman by Laurence Westwood – A Review”