The Star Trek: Waypoint series is a collection of comic books that feature very short stories that take place in the extended Star Trek universe. I love the idea behind this series so much, as it allows writers to peak into corners of the universe that wouldn’t make it onto television.

Star Trek: Waypoint Special #1 contains four stories. Here’s my breakdown of each one:

“Only You Can Save Yourself”

The first story follows Ezri Dax, from the series Deep Space Nine. Ezri Dax is a joined trill, which is a species able to host a sentient symbiont. Each symbiont is distinct and can have multiple hosts. Ezri has the Dax symbiont.

In this story, the ship Ezri Dax is on is under attack, and she’s trying to save herself and the others on board. Obviously, this produces a lot of stress, and she gets through it with the help of Dax’s previous hosts.

I really enjoyed this story. The Trill is a species primarily explored in Deep Space Nine, and I loved that the story made use of the fact that each new host retains the memories and experiences of each one that came before it. 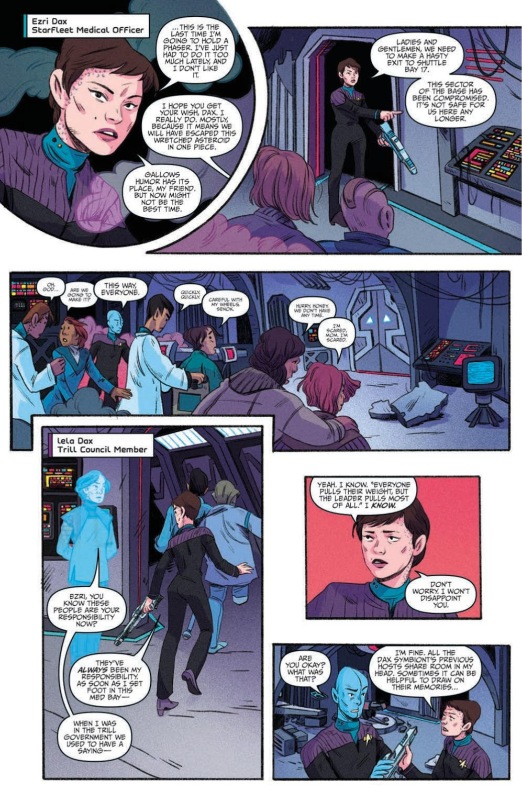 I also really liked the art of this story, drawn by Nicole Goux. It’s a style that I really love in comic books, and the colors done by Miquel Muerto fit perfectly.

Our second story features everyone’s favorite omnipotent being, Q. Before I get into this review, just know that I really, really like the character of John de Lancie’s Q (there are other Qs in the series), so I’m a wee bit biased.

Q is tasked with training a new Q, and shows him all the benefits of being a god-like entity. The story proposes that not everyone wants that kind of power, though.

This story was fine, but nothing special. As I said before though, I’m a big fan of Q stories.

“My Human Is Not”

This is 100% my favorite story in this issue, and worth buying the entire issue for.

The story focuses on Data’s cat Spot and his relationship with Data. However, Spot finds that one day Data is not quite what he seems, and has to act fast to protect the ship.

Everything about this story is absolutely perfect and Sonny Liew’s artwork fits is adorable and fits the story so well.

“Histories” is the final story in this issue, and is told from the point of view of an alien race as they account their encounter with the Federation. This story reminded me a lot of the Star Trek: Voyager episode “Living Witness,” as it deals with the truth of history and how it’s portrayed.

Have you read any of the Star Trek: Waypoint series? If so, which were your favorites? Let me know in the comments!