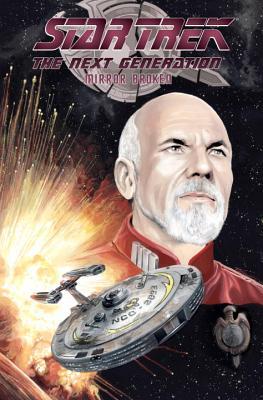 Can you believe that this is the first Star Trek review I’ve done?

In case you’re new to the blog: I’m a Trekkie. I’m obsessed with all things Starfleet.

(With the exception of the J.J. Abrams movies, but that’s a post for another day.)

IDW puts out a lot of great Star Trek content and the comics that take place in the Mirror Universe have easily become my favorites. The Mirror Universe was first established in Star Trek: The Original Series season 2, episode 4, titled Mirror, Mirror.

This alternate universe is the polar opposite of the prime universe’s principles. Rather than the unity, peace, and spirit of exploration we know from the Federation, the Mirror Universe’s Terran Empire is xenophobic and violent. They fear anything they deem as being “other.” Members of the Empire regularly stab their comrades in the back (figuratively and literally).

Since Star Trek: TOS, the Mirror Universe has popped up over and over again in various series. Star Trek’s newest series, Discovery, spent most of the latter part of its first season in the Terran universe. Enterprise had a couple of Mirror Universe episodes as well.

I’m fascinated by the Terran Empire and am always on the lookout for new content. This isn’t the only IDW series that takes place in the Mirror Universe, but it was the first collection that I read.

The series is written by brothers Scott and David Tipton, who are no strangers to Star Trek. They wrote another personal favorite, which was a Star Trek/Doctor Who mashup.

Mirror Broken is the story of how Captain Picard, who commands the I.S.S. Stargazer, puts together a team in order to take over the Empire’s newest, most powerful ship, the I.S.S. Enterprise. Many of the characters are ones you’ll know from Star Trek: The Next Generation: We’ve got William Riker, Data, Deanna Troi, Geordi La Forge, and Reginald Barclay, among others.

Barclay was the most surprising character of the bunch. Rather than his meek, nervous character on ST: TNG, in this series Barclay is strong and wants victory and power for himself. Although I like the original Barclay’s character, the Mirror Universe version is a nice change of pace.

I also enjoyed Data’s Terran version, who spent his free time upgrading his own body, even having a variety of arm attachments. Data is one of my favorite characters in ST: TNG, however, so I’m not surprised I enjoyed his character here.

The art by J.K Woodward was perfect for this series, and I loved the Terran versions of the Starfleet uniforms.

I wish that Deanna Troi would have had more of a role in the series, aside from just scanning the thoughts of crew members to get a grasp of their loyalty to Captain Picard. Actually, I would have enjoyed larger roles for any of the female characters.

It should be no surprise to anyone that I gave this 4.5 stars. The only reason I didn’t give it five stars was because I’ve read many Star Trek comics, and there are some I enjoyed more than this one.

Have you read any Star Trek comic series? If so, which are your favorites?

If you aren’t already, don’t forget to follow me on social media:

If you would like to support Read Yourself Happy, you can donate through Ko-Fi