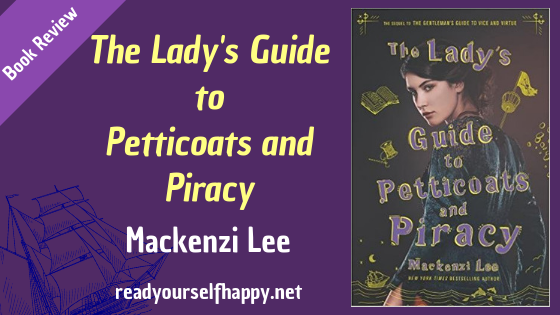 “Everyone has heared stories of women like us – cautionary tales, morality plays, warning of what will befall you if you are a girl too wild for this world, a girl who asks too many questions or wants too much. If you set off into the world alone.

“Everyone has heard stories of women like us, and now we will make more of them.”

The Lady’s Guide to Petticoats and Piracy is a sequel/companion novel to Lee’s wonderful The Gentleman’s Guide to Vice and Virtue, one of my favorite books that I had the pleasure of reading in 2018.

The story follows Felicity as she tries to become a doctor in a society that believes women are inferior and have no place in medicine.

After the events of The Gentleman’s Guide, Felicity finds herself working at a bakeshop in Edinburgh to make ends meet. The owner of the shop, Callum, wants to marry Felicity, but Felicity is horrified at the thought and flees to Monty and Percy in London.

While in London, she makes an attempt to petition Saint Bartholomew’s Hospital to take her on as a student. An attempt that goes disastrously, but afterward, when she feels that things are never going to go her way, one of the men run outside after her to advise her to reach out to Alexander Platt, her medical hero, a man whose books she has obsessed over.

Much to the horror of Monty and Percy, she takes off with a pirate girl named Sim to go confront Alexander Platt, who is marrying Felicity’s former best friend, a girl named Johanna who she had a massive falling out with. She takes a serious gamble undertaking this journey – Sim seems rather dangerous as she threatened someone’s life just as the journey is getting started, she hasn’t spoken to Johanna in years, and she has no idea if she’ll even make it in time to get to Platt before he and Johanna leave for their honeymoon. It’s the only chance she has though, so she risks everything for this one last shot of becoming a doctor.

Everything about this book is amazing! I loved it just as much as The Gentleman’s Guide and Felicity is a force to be reckoned with. She was one of my favorite parts of The Gentleman’s Guide, so as soon as I found out Lee’s sequel would be told from her perspective, I immediately pre-ordered it.

Lee deals with the sexist attitudes of the 1700s very well, although there are so many difficulties that Felicity encounters that women of today understand all too well, which is quite unfortunate. From the very beginning, when Callum is asking for her hand in marriage, he tells her that her dreams of becoming a doctor are frivolous and something she’ll eventually grow out of. Not only that, but he decides that if she doesn’t accept his proposal, she can find work elsewhere. He also assumes that she’s going to say yes, even though it’s clear that she’s going to say no. Felicity is better than that though:

“I do not want to spend the rest of my life smelling sugar. I don’t want pastry beneath my fingernails and a man content with the hand life has dealt him and my heart a hungry, wild creature savaging me from the inside out.”

All three of the main female characters are well-written and loveable. I’ve already talked a lot about Felicity, but we also have Sim, a tough-as-nails pirate who has sailed with the Crown & Cleaver and is completely fearless; and Johanna, a naturalist who wants to know all there is to know about flora and fauna, while still embracing feminity and pink bows. I adore their relationships with each other and their very distinct personalities. I found myself wanting to be best friends with each one of them.

Felicity’s burning passion to become a doctor is the real star of this book, and it’s a passion that I recognize in myself and in many of the women around me.

“I want to know what it is and how it works and why it saved Sim. When all my indignance over inequality, the plight of women in the world, and the education denied me is boiled away, what is always left is that wanting, hard and spare and alive, like a heart made of bone. I want to know all of it…I want to know how things go wrong. How we break and the best way to put ourselves back together. I want to know it all so badly it feels like a bird trapped inside my chest, throwing its body against my rib cage in search of the strong wind that will carry it out into the world. I would tear myself open if it meant setting it free.”

The characters also all know that they don’t need to be saved by men, that they can save themselves, especially if they work together. Heroic men saving weak women is a trope I loathe, and I love seeing women save themselves in this novel:

“Zounds, does this fool actually think he’s saving me? Another storybook hero to swoop in and rescue a girl from a dragon or a monster or herself – they’re all the same. A woman must be protected, must be sheltered, must be kept from the winds that would batter her into the earth.

“But I am a wildflower and will stand against the gales. Rare and uncultivated, difficult to find, impossible to forget.”

An aspect of Mackenzi Lee’s novels that are particularly amazing is the amount of diversity and representation she writes into her characters. In this series, we meet characters that are queer, black, Muslim, rich, poor, asexual, epileptic, as well as being shown difficult issues such as familial abuse, sexism, homophobia, and addiction.

I don’t want to give any spoilers, but one of my favorite things about the books were the creatures that Felicity, Sim, and Joanna are trying to save. They were completely unexpected, and I actually gasped with excitement when they were introduced into the story!

One of the things that I love about both of Mackenzi Lee’s books that I’ve read is that at the end of the book she includes a bit of history and her inspirations for the story. This is something that I wish all books had, and I hope more writers take note of it. It’s always great to understand how a writer came up with a character and to see the historical setting that the book was inspired by.

5 out of 5 stars, easily. This is a book you should buy because you’ll end up reading it over and over and over again. If you want to read an empowering book where women fight for themselves and come out on top, go read this one right now.